Debrecen’s Main Street - Piac Street - was the proud venue of the famous town fairs for 300 years starting in the 16th century.

Today’s cityscape, however, is defined by the former merchant houses erected at the turn of the 19th and 20th centuries. The pink office building of Debrecen’s First Savings Bank (on the corner of Kossuth Street) and the twin tenement blocks with the copper spires (on the corner of Simonffy Street) spectacularly stand out against the background of slightly gaudy downtown houses. Number 54 is occupied by Debrecen’s most beautiful Art Nouveau building now functioning as County Hall.Debrecen’s Main Street was suitable for traffic for two centuries thanks to a 650-meter-long and 6 to 7-meter wide elevated wooden walkway erected in the 1600s. A small section of the ancient “mud bridge,” now on display outside Hotel Aranybika, is a peerless archeological relic.

Debrecen’s Main Square - Kossuth Square - features the iconic group of statues erected to commemorate Lajos Kossuth, the huge mosaic depicting the city’s coat of arms, made by placing together 180,000 pieces of Venetian glass, the Millennial Fountain as well as the Art Nouveau building of Hotel Aranybika. The extended walking zone that includes the square is the venue of countless summer cultural events such as the Turkey Days and Flower Parade. This is also where the city’s Christmas tree is placed at the beginning of the festive season. 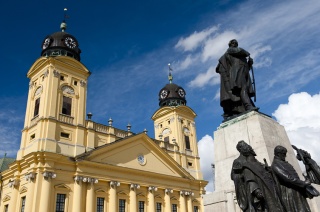 Hal köz Located at the place of the old fish (“hal”) and dairy market, this is one of Debrecen’s most pleasant downtown piazzas. Déri Square This is one of the most ambient and intimate squares of Debrecen. Main Building of the University of Debrecen One of the nation’s five research universities, UD celebrated its centenary in 2012.